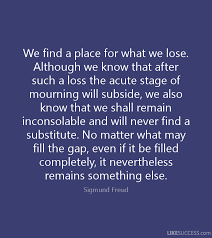 Pam Firth, Programme Tutor; Why Freud’s contribution & psychoanalysis remains a major influence on our understanding of the grieving process

To coincide with the anniversary of Sigmund Freud’s birthday (6th May 1856) we celebrate with an awareness week where we share the benefits of studying psychodynamically, why The Counselling Foundation endorses this approach to therapy, and the differences compared to other therapies.

Freud’s paper entitled Mourning and Melancholia was published in 1917. He identified that both conditions were triggered by loss and that mourning was associated with the loss of a person. Tracing the study of social work, much of which is concerned with loss and change, and the effects of grief and grieving both have their roots in psychoanalysis and in the social sciences ( Currer 2001).

Early researchers into bereavement care came from psychiatric and psychodynamic backgrounds. Eric Lindemann ( 1944)  an American psychiatrist systematically researched the responses of the bereaved following a catastrophic  fire which killed a great number of young people in a nightclub.

In the UK John Bowlby a psychoanalyst and psychiatrist was concerned with the effects of maternal deprivation on the lives of thousands of young children separated from their families during the second world war. He went on to develop Freud’s initial work ( 1969.1973,1980 ) by exploring  the relationship between separation anxiety and grief. His work on Attachment Theory has influenced so many aspects of our lives such as the hospitalisation of young children and child care policies. He concluded that the loss of an attachment figure led to grief. Counsellors  and many other professions use his theories about the “breaking of affectional bonds” as  core ideas in their work.

Colin Murray Parkes (1970.1996) also a psychiatrist, worked with Bowlby at the Tavistock Clinic in the 1970’s and is now considered to be the leading national and international writer and researcher in the field of bereavement and bereavement care. He continues to collaborate with researchers influenced by other psychological ideas and social construction theories. The focus for much of the work in bereavement care is to identify what sort of help and support bereaved people need and to move away from what can be seen as medicalising a normal process which will affect us all.

However Freud’s early work remains as a major influence on our understanding of grief and loss.

Parkes, C.M. ( 1970) ” The First Year of Bereavement: A Longitudinal Study Of the Reactions of London Widows to the Death of Their Husbands. Psychiatry, Volume 33.p.444