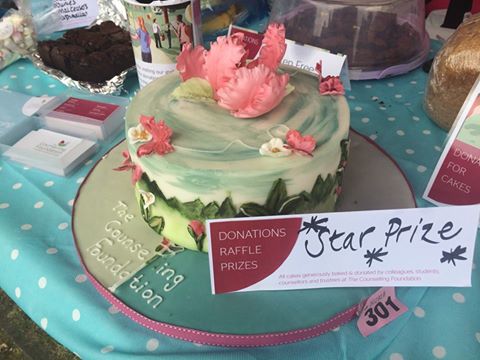 At the weekend we attended for the first time, the infamous Bedford River Festival and with the support from our staff and trainees who gave up their time to bake and bring in cakes and man the stall, we collected over £370 in donations for the Foundation!

The Foundation would like to say a massive thank you to everyone who helped towards making our first Bedford River Festival a huge success; whether you baked/donated cakes, gave tombola prizes or helped on our stand. Without your support the Foundation would not have been able to attend the festival and raise awareness of the charitable work that we help make possible.

The weather over the weekend was perfect and meant the bi-annual event attracted thousands of visitors. We spoke to many people directly asking for counselling or taking leaflets and have been really successful in getting our name out into the Bedford community and offering invaluable support to those that need someone to talk to who are facing difficult periods in their lives. There was also a positive interest in our training courses and people wanted to find out more about what we offered. Our new branded gazebo, along with our cakes, tombola and amazing star prize; our Counselling Foundation cake were a great attraction over the weekend and helped to raise an amazing £370 by donations alone.

We were broadcast across the airwaves to the patients of Bedford Hospital, courtesy of Radio Bedford as DJ’s Peter Hadfield & Geoff Clark came and interviewed us on Saturday. We also had an opportunity to meet and talk to the charity Mind BLMK (Bedford Luton Milton Keynes) who also attended the festival and are now discussing ways in which we can work together in order to support more people in Bedford with a talking therapy service. The event was a huge team effort, with special thanks to students, Jennifer Cooper, Jane Sparrow, Barre Carpenter, Charlotte Eastham, Heidi Watling and Joy Mellor, who joined foundation colleagues, Pam Firth, Sue Clements, Daniella O’Brien, Helen Thomas, myself and Becci who all gave up their time to help create a buzz on our stand over the two days. Becci and I want to personally thank you for your efforts over the weekend; without your support the Foundation would not have been able to attend the festival and raise awareness of the charitable work that you help make possible.