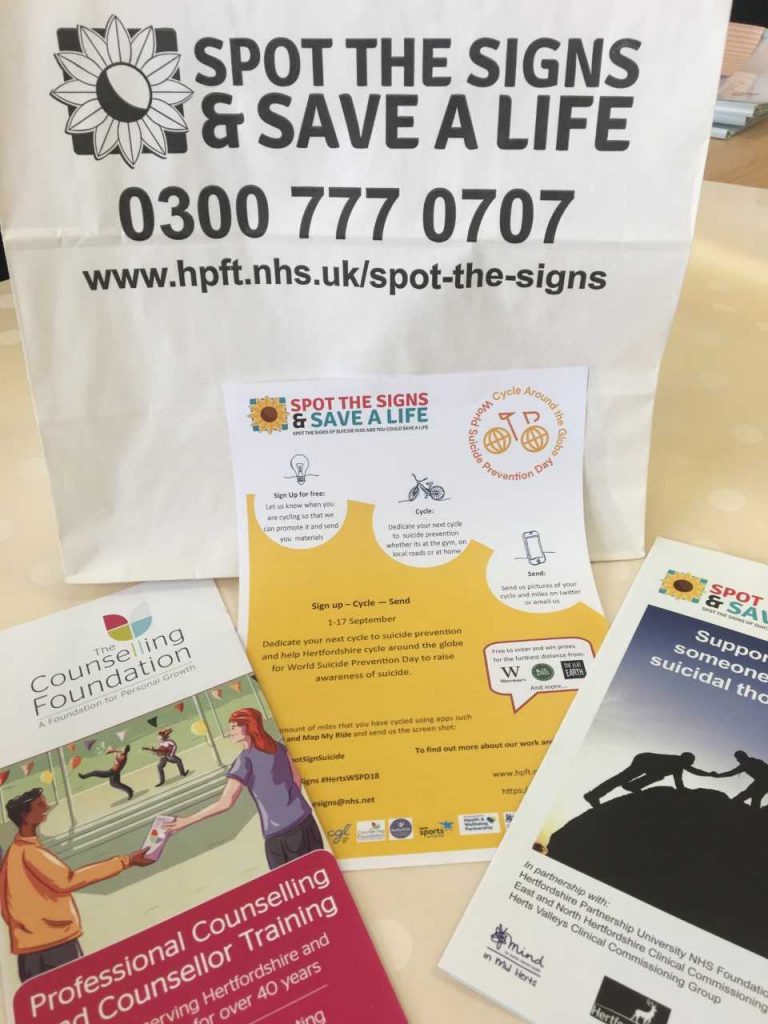 World Suicide Prevention Day (WSPD) takes place on Monday 10 September, and The Counselling Foundation are partnering with Spot the Signs and Save a Life, the Hertfordshire suicide prevention campaign whose vision is to make Hertfordshire a county where no one ever gets to a point where they feel suicide is their only option.

Learn to Spot the Signs

In the UK more than 6,000 people due by suicide  a year, an average of 18 each day.  Male suicide is often called the ‘silent killer’ as it is the single biggest cause of death for men under the age of 45 in the UK, three times higher than for females.

It is well known that men do not ask for help or speak as openly as women and the suicide figures reflect this as a fact.  It does not mean that a women’s suicide is any less important, the good thing is that more Women are asking for help.

Would you know the warning signs to look out for if someone could be feeling suicidal?

Here are some warning signs:

Contrary to what you may have thought, don’t be afraid to ask someone directly if they are feeling suicidal.  It will not make their feelings worse or give them ideas.  In fact the opposite is true.  For many people it can be a huge relief to be asked the question in a direct way.

Asking someone directly may also give them chance to open up about their feelings and help them to think about positive options rather than suicide.

“Bringing up the subject of suicide and discussing it openly is one of the most helpful things that you can do.”  Mind in Mid Herts Spot the Signs

How can you help?

Participating in regular physical activity is associated with lower rates of depression and anxiety across all age groups. The teams are encouraging everyone particularly men to participate in pedal power by cycling between 1st -17th September and dedicating miles cycled to suicide prevention by uploading to social media and using the hashtag #HertsWSPD18, or sending photos to hpft.spotthesigns@nhs.net.

The miles will be added up and sent to the international Cycle Around the Globe page.  There are prizes for anyone that cycles the furthest during the campaign, whether on the road or fitness bike and anyone is able to get involved.

Dr Xand van Tulleken’s explores what we know about why people develop suicidal thoughts and if there is anything that we can do about it.

Have you been affected by suicide?

If you’ve been affected by suicide or would like to talk to someone, The Counselling Foundation provide affordable counselling to support the many people who have been bereaved by suicide or have been close to someone who has made a suicide attempt, who also need support, helping to remove the stigma of talking openly about suicide.

To speak to someone about receiving counselling, please call your nearest centre:

Do you urgently require help?

If you should need to contact and speak to someone immediately you can contact The Samaritans who are open 24 hours a day with the below details. Please note that the Foundation provides professional and supportive counselling to those in distress but cannot provide an emergency service.